Quick Tour of the Recovery Version

A Brief Explanation
Excerpted from the Preface to the Recovery Version

Throughout the centuries, translations of the Bible have steadily improved. In general, each new translation inherits from previous ones and opens the way for later ones. While a new translation derives help from its predecessors, it should go further. The Recovery Version of the Holy Bible, following the precedent set by the major authoritative English versions and taking these versions as reference, not only incorporates lessons learned from an examination of others’ practices but also attempts to avoid biases and inaccurate judgments. This version, frequently guided by other versions, attempts to provide the best utterance for the revelation in the divine Word, that it may be expressed in the English language with the greatest accuracy.

As with any translation of the Bible, the determination of the original text, based upon the available manuscripts, forms the basis for the text of the Recovery Version of the Holy Bible. The translation of the Old Testament is based on the current scholarly text of the Hebrew Scriptures, Biblia Hebraica Stuttgartensia (BHS; revised 1990 edition). The New Testament follows, for the most part, the Nestle-Aland Greek text as found in Novum Testamentum Graece (26th edition). However, in determining the original form of any verse, the translators of the Recovery Version gave careful consideration to the larger context of chapter and book and to similar portions of the Old and New Testaments. The most recently discovered manuscripts or the manuscripts of oldest date are not necessarily the most accurate or reliable; hence, the determination of the text for this version was based largely upon the principle stated above. Departures from these editions are generally indicated in the footnotes.

The subject provided at the beginning of each book and the outline of each book take the historical facts as their base and express the spiritual meaning in each book. The footnotes stress the revelation of the truth, the spiritual light, and the supply of life more than history, geography, and persons. The cross references lead not only to other verses with the same expressions and facts but also to other matters related to the spiritual revelation in the divine Word. 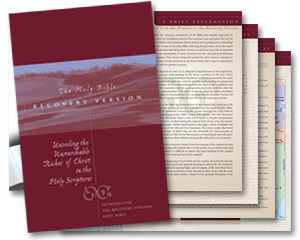